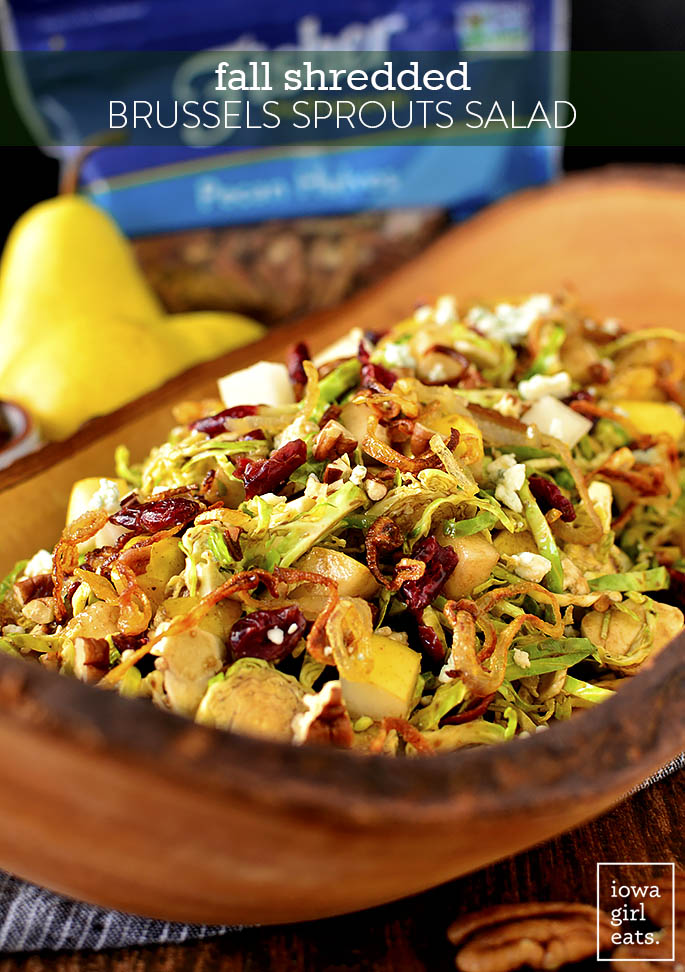 We’ve reached a new parenting milestone – Lincoln is finally old enough to play outside in the snow by himself! Yes, we got snow earlier this week. Still hard to talk about. Anyway, as the saying goes: if your kids are acting crazy, just add water. Well hey, I’m finding frozen water works well too. Every day this week Lincoln has walked in the front door from school then practically right out the back door to spend some time outdoors. He comes in about an hour later in SUCH a great mood. (Anybody else’s kids total bears when they get home from school? This has solved that issue!)

A ton of people have taken the snow as an excuse to decorate for Christmas early but I’m trying to hold out as long as possible because a.) I don’t want to admit the season that shall not be named is most likely here to stay, and b.) I want to give turkey day the attention it deserves. Especially because I gave one of my most popular Thanksgiving side dish recipes a makeover just in time for the big day. Include Fall Shredded Brussels Sprouts Salad in your holiday spread once and I promise it’ll become an annual tradition! 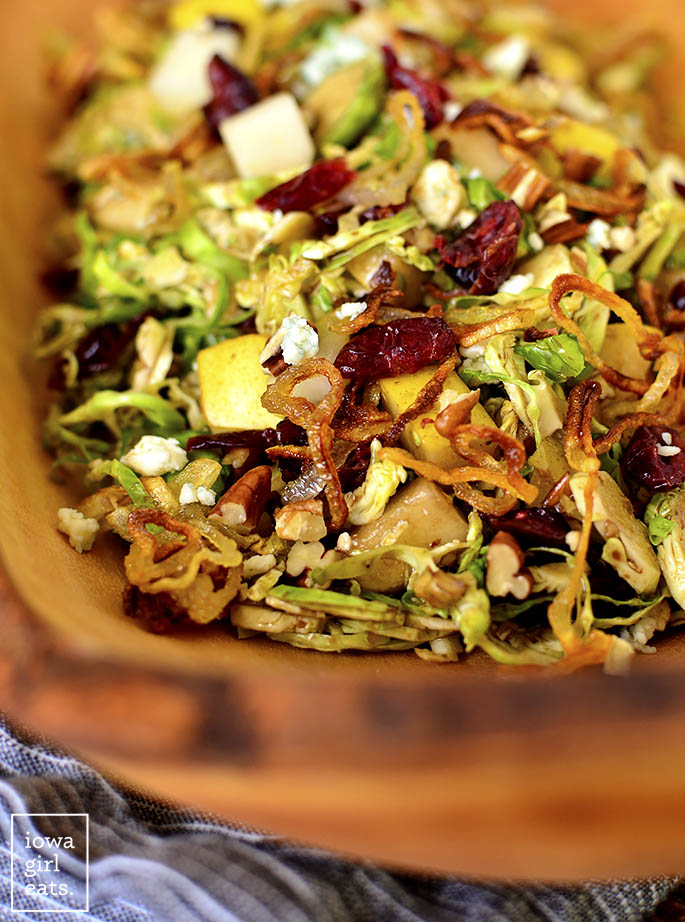 File Fall Shredded Brussels Sprouts Salad under “better than you can possibly imagine”. It’s like riding the Peloton with Jess King. Oh wait no, that’s harder than you can possibly imagine. Hurts so (mostly) good. Love her!!! Anyway, you can pick out and taste every single ingredient in this wonderful side dish, and the combination of fresh, savory, sweet, creamy, and crunchy is so divine.

Shredded brussels sprouts, dried cranberries, chopped pecans, fresh pear, crumbled gorgonzola cheese, and crispy shallots are drizzled with the easiest, four ingredient (plus salt and pepper) Maple-Balsamic Dressing to create a flavor packed, super healthy fall salad that you’ll go back for more and more and more of. It is so, so tasty. 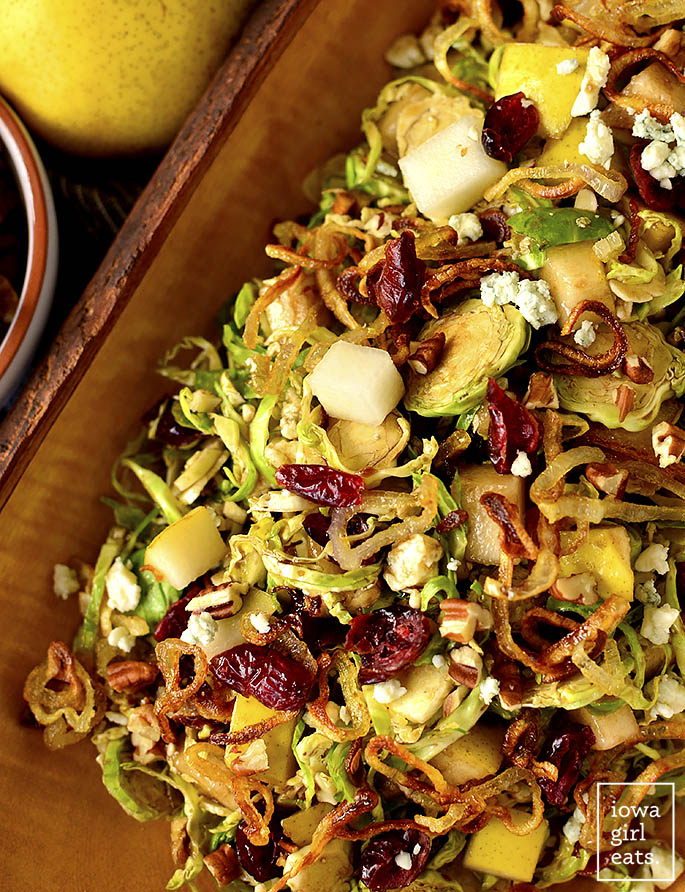 If you’re a long time reader of IGE than you may recognize this recipe as an oldie but goodie, as it was first published in 2015. I wanted to spruce up the recipe photos as well as highlight the Fisher Naturals Pecan Halves that give this salad recipe a satisfying crunch and boost of holiday flavor.

I’ve been using Fisher Naturals nuts in my recipes for years and years (and years!) now. Not only are they of the highest quality, but they’re preservative free but naturally gluten free, too. My Mom has a metal nut cracker and bowl that she sets out around the holidays every year then buys whole nuts to crack open and snack on. This is a holiday tradition she grew up with that she’s passionate about carrying on. Fisher Naturals nuts taste just like the ones we crack and eat straight out of the shells. Pure and fresh! 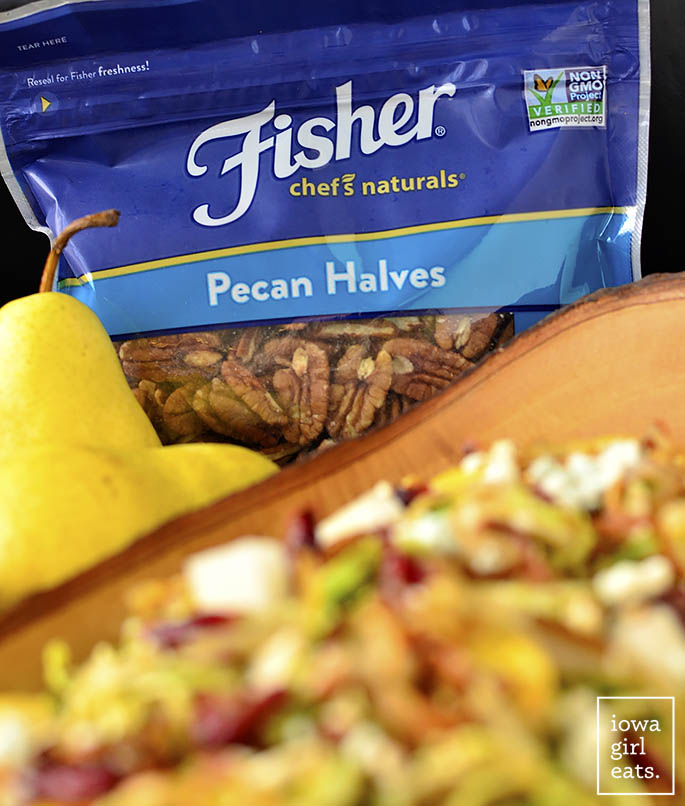 Now, not only is this salad recipe great to make for Thanksgiving on account of its warming fall flavors, but it can be partially made ahead of time too which is great if you’re preparing multiple dishes on the holiday. Below, I’ve detailed out what you can prep ahead of time and what you should wait to do until just before serving.

If you’ve made this recipe before then I hope you’re taken for a delicious trip down memory lane. If this is the first time you’ve seen this recipe, I just know you’ll adore it! 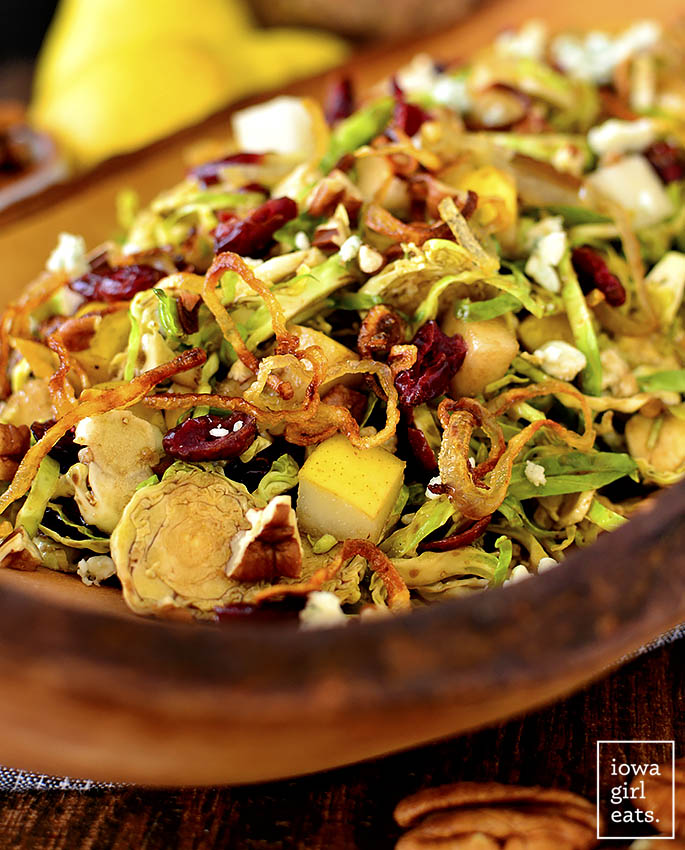 Start by shredding 12oz brussels sprouts. Peel back the outer leaves of each sprout then hold onto the stem and use a sharp knife to shred them as thinly as possible. It’s tempting to use a bag of pre-shredded brussels sprouts for this dish, but they’re a touch too thick for a raw salad, in my opinion. Hand shredding gets them much thinner! 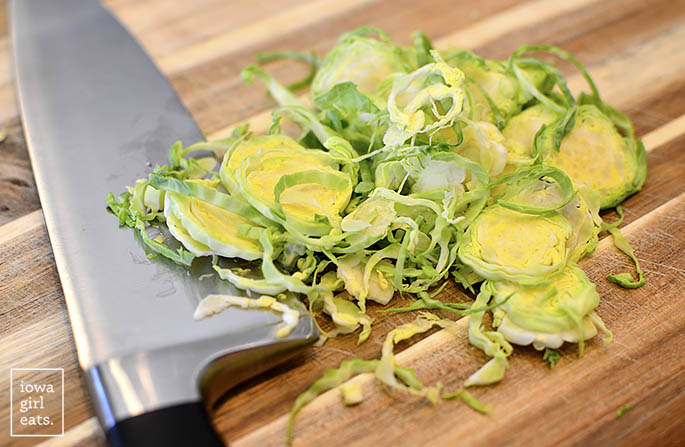 Add the shredded sprouts to a large bowl with 1/4 cup dried cranberries, 1/4 cup crumbled gorgonzola cheese (could use feta if you like that better) 1 chopped ripe pear, and 1/4 cup Fisher Naturals Pecan Halves that have been roughly chopped. 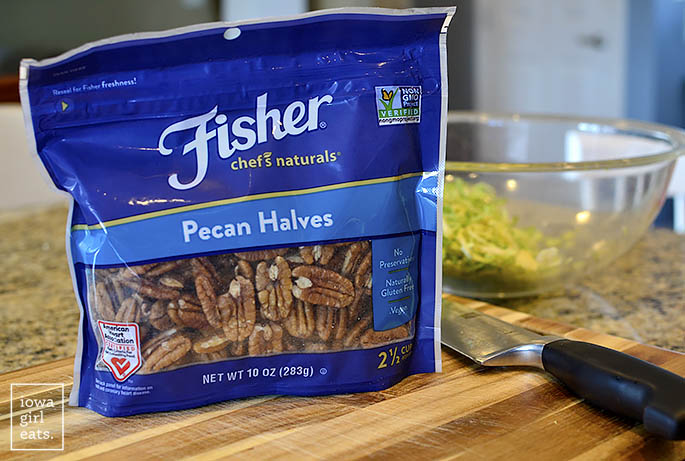 Next, pan fry 2 jumbo shallots sliced into rings. They are the crowning glory of this salad! Once fried, shallot rings are a FANTASTIC replacement for french fried onions on top of casseroles and in salads. No breading required, just thinly slice two shallots then let them sizzle in olive oil. They add a delicious richness to this salad. 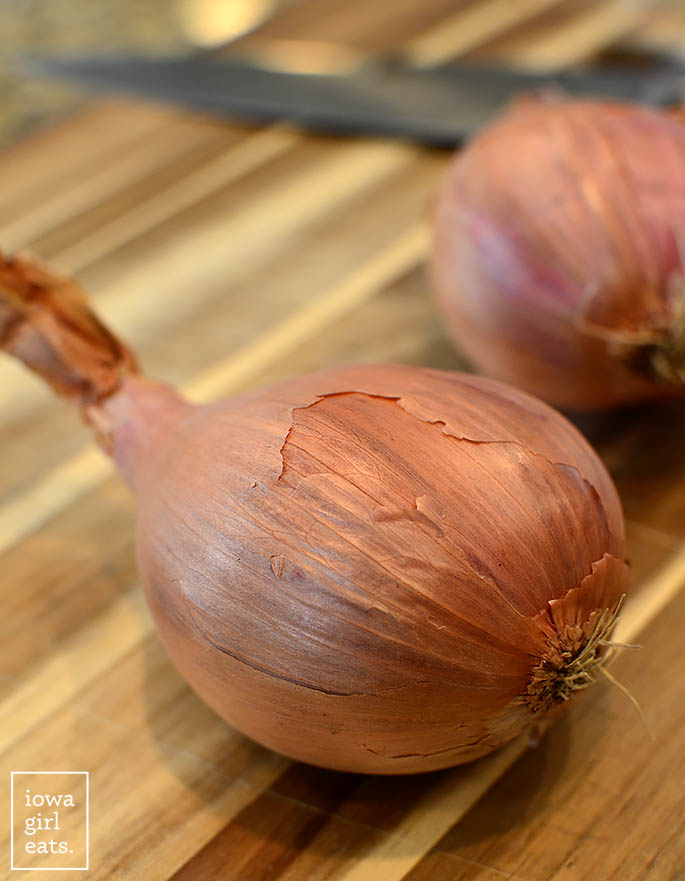 Heat 1/4 cup extra virgin olive oil in a large skillet over medium-high heat. I always test a slice of shallot first to see if the oil is hot enough. If the entire piece starts sizzling right away, it’s ready. 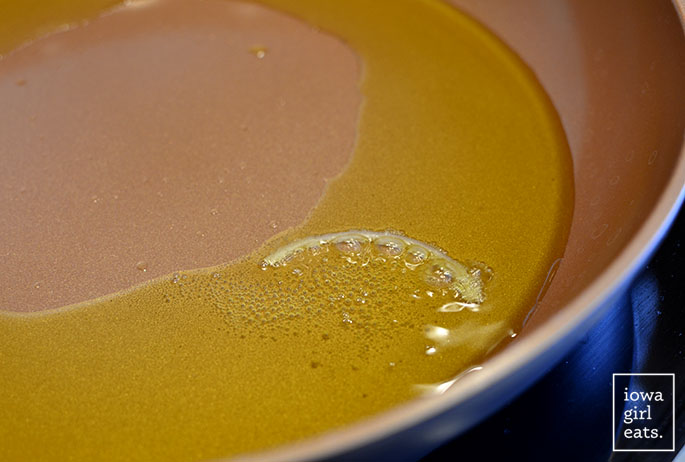 Fry the shallots in two batches. Just add them to the oil then stir occasionally until they’re golden brown. Each batch will take 2-3 minutes. 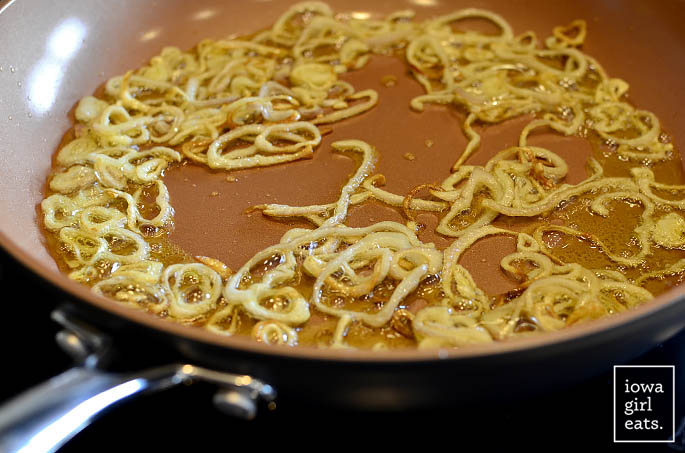 Scoop the fried shallots onto a paper towel lined plate to drain then sprinkle with salt. SO GOOD! 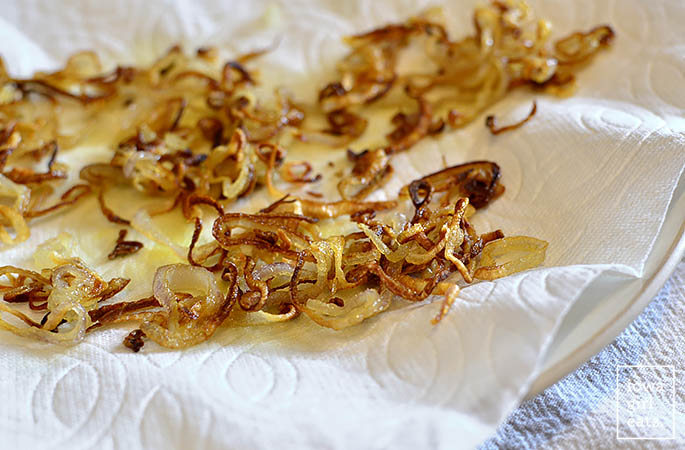 Last step is to mix up the Maple Balsamic Dressing that ties the whole salad together. It is incredible! To a jar with a tight fitting lid add 2 Tablespoons each extra virgin olive oil and balsamic vinegar, 1 Tablespoon pure maple syrup (not pancake syrup,) 1 teaspoon Dijon mustard, salt, and pepper then shake to combine. Pour it over the salad then toss, and then add the fried shallots and toss again. 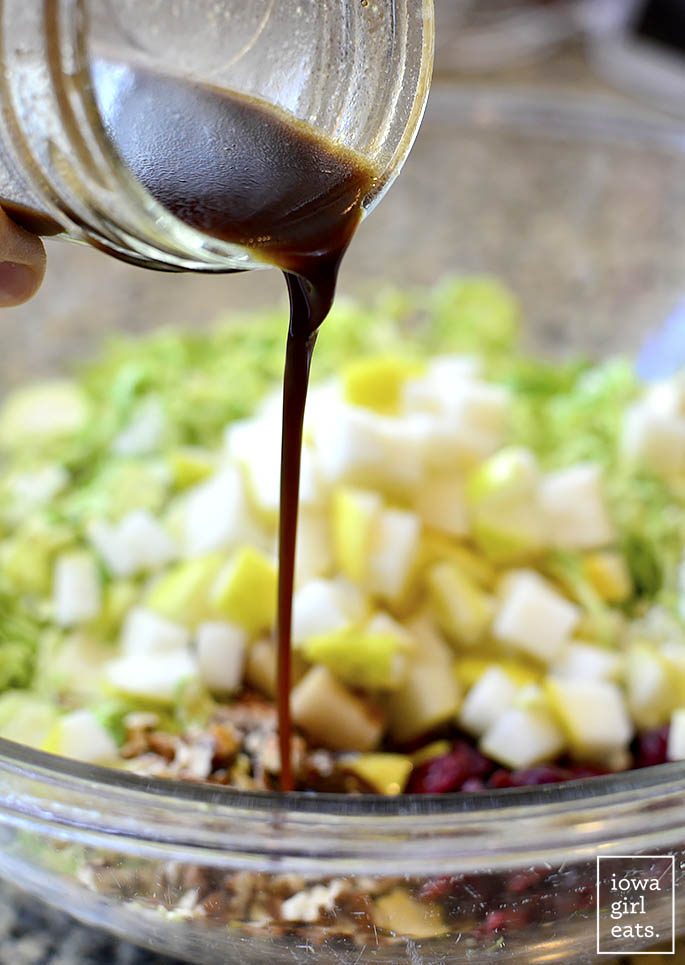 That’s all she wrote! If you want to make a portion of this salad this ahead of time you can add the shredded brussels sprouts, dried cranberries, chopped pecans, and gorgonzola cheese to a large bowl with a lid, and mix up the dressing. Before serving, chop the pear then pan fry the shallots, and then assemble the salad with the dressing.

I know you are going to ADORE this fresh and flavor packed Fall Shredded Brussels Sprouts Salad! Enjoy, enjoy! 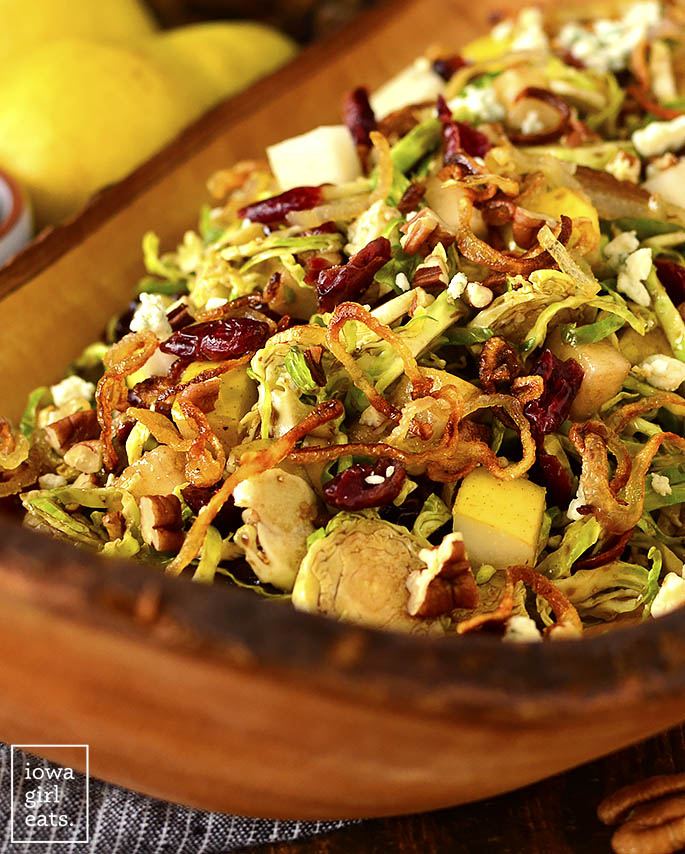 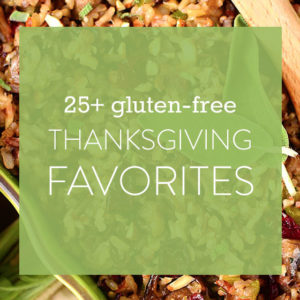 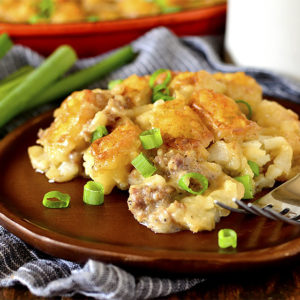 Fall Shredded Brussels Sprouts Salad is crispy and crunchy, and full of fresh and savory flavors!

This recipe is courtesy of Iowa Girl Eats, http://iowagirleats.com. 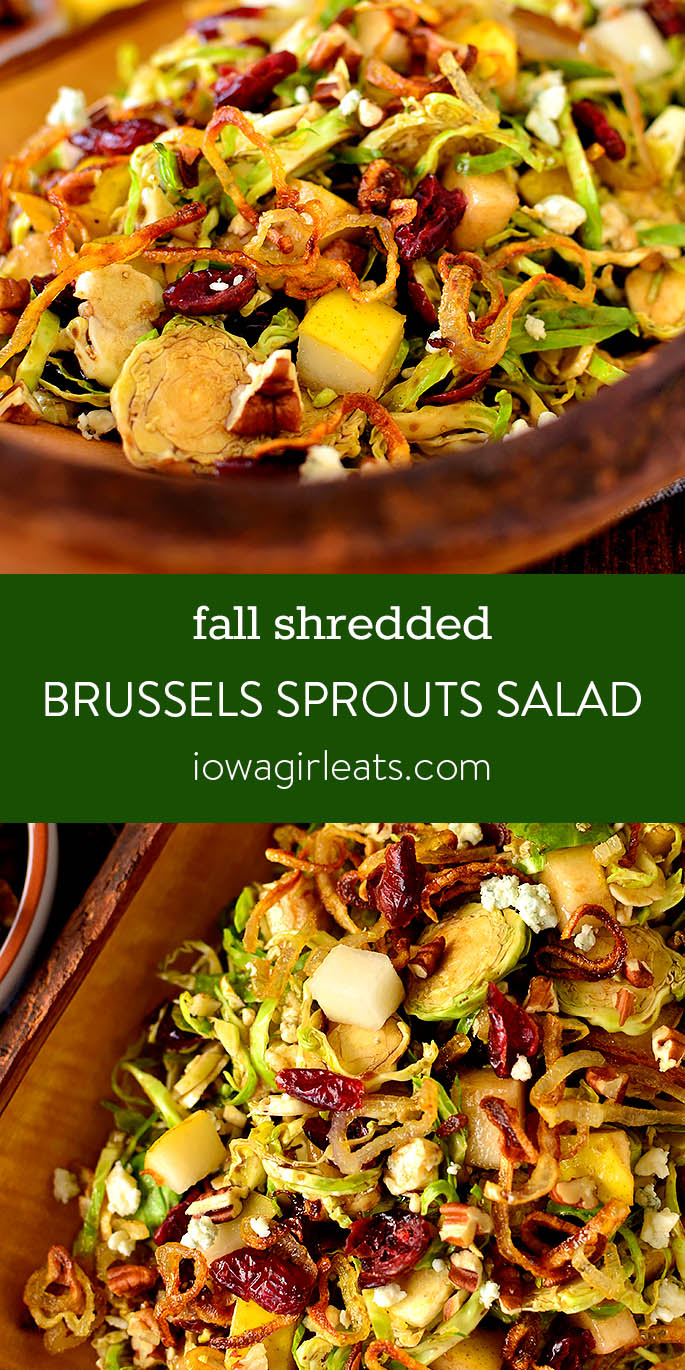